This weekend was the peak of the World Youth Day week, with the evening prayer vigil with the Pope at Campus Misericordiae, the camp overnight and the final Mass the next morning.

We started off Saturday with the Vancouver pilgrims gathering at St. Anne's Church.


After the Mass, our group did some sightseeing at Wawel Cathedral and viewed a L'arche artwork exhibition.  We had lunch at Zabłocie 13 before we split up as eight of us would go to the vigil and four would stay back in the city.

The eight of us embarked on the pilgrimage to Campus Misericordaie, the vigil site.  We were able to take the tram to the last stop, where we then proceeded to walk the rest of the 6km to the site.

We passed the first food station where we could pick up a bag full of food—about 4 meals worth.  However, we decided to pick it up at a later station.  It turned out this was a bad decision as when we arrived at the second and final food package pickup site, they ran out of food packages.

Having brought some snacks and water, we decided we could forego the food package at that time.  There were rumours that more food packages would be available later.  We proceeded onwards.

As we arrived at our section at around 6pm, there were signs saying that the section was closed.  But we decided to try to get into our section anyway.  Turns out there was no security, only a couple guards monitoring the entrance to our section.  There was already a group forming wanting to get into the section, and luckily the guard let us through after a few minutes (without checking our IDs or tickets).

We were able to find ourselves a small spot. 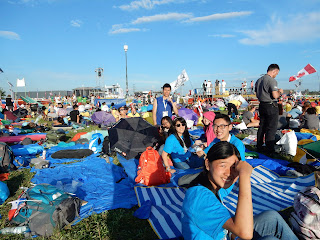 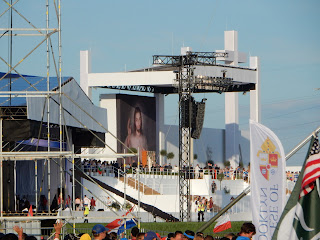 At around 8:30pm, four of us went back out to find food packages.  We ended up walking about 6km back to the first food station.  We were able to get our food packages, and made the hike back and ended up returning more than two hours after we left.  We were happy to be reunited as a group, and to be able to eat food! 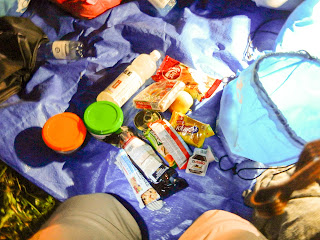 The packs consisted of:


In addition, since a few of our pilgrims didn't attend the vigil, we got three extra bags of food just in case.

The night was quite lively, with people singing and drumming, trading gifts.  The atmosphere ended up dying down by about 3am.

The sun rose the next morning at around 5am; our natural alarm clock. 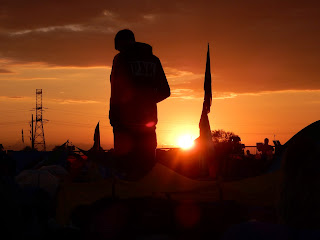 We had breakfast and then Thomas led us in morning prayer.  We then participated in the Final Mass with the Pope.  At the end of the Mass, the Pope announced that the next World Youth Day would be held in Panama! 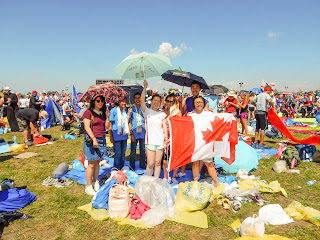 We stuck around Campus Misericordiae for a little bit, to eat lunch and to clean up our stuff.  It turns out that we didn't really need all three extra bags of food, and we quite unfortunately ended up disposing of a lot of uneaten food.

At about 1:15pm we started on our way out.  The walk out was much more challenging than our walk in.  We were met with thunderstorms three times.  Trams were not running along our route.  We also came as close as we ever wanted to be to lightning (it came down within tens of metres of where we were walking).  It was difficult to find shelter on the industrial streets we were walking along, so we pressed on to get to the Old Town as quickly as we could.  We finally arrived at Market Square around four hours later and were able to make contact with the rest of our group back at the hotel.

We decided on a quick dinner at Chimera and headed back home to meet back with the rest of our group and have a shower and rest.  We ended up walking about 20km today, much more than we expected.  But we were happy to be safe at our hotel at the end of the day.

This pretty much ends the pilgrimage part of our World Youth Day trip.  The next couple of days we will be doing some sightseeing around the city.
Posted by Dennis at 12:00 PM No comments:

In the evening we attended the Way of the Cross.  Pope Francis was there to pray with us as well.

Tomorrow will be another big day for us. We will be making the pilgrimage to Campus Misericordiae for the Vigil and Final Mass with the Holy Father.
Posted by Dennis at 12:00 PM No comments:

We started off this morning similar to yesterday at catechesis.  Today, our catechist was Cardinal Patita Paini of Tonga.  After catechesis, we hung out and had lunch at another food truck garden near the catechesis site and Błonia Park, where we would attend the Papal Welcome in the evening.

The pope arrived at Błonia Park on a special tram: Tram del Papa.


Since we were at Błonia Park early, we secured space in our section of the park where we were able to get a close glimpse of Pope Francis as he toured the sections in his Popemobile.

After the papal welcome, we had dinner at the same food truck garden as lunch.  And once again, we walked three kilometers back to the hotel as the buses were cancelled due to the event at Błonia Park.
Posted by Dennis at 12:00 PM No comments:

This morning we start the first of our three days of catechesis—talks from various cardinals and bishops.

We were excited to have Cardinal Archbishop Dolan of the archdiocese of New York be our first catechist. 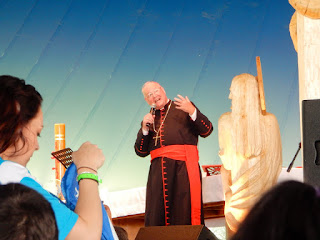 He was a very vibrant speaker and talked about how we cannot procrastinate with our faith.  We have to decide to want God now.  Also, in regard to showing our faith to other people, we should not be at the two extremes by being "bible thumpers" or by not talking about our faith at all; we should show virtues of joy and peace in our daily lives.

After we grabbed lunch from a food truck zone, we made our way to the Divine Mercy Sanctuary and the John Paul II Sanctuary for the Pilgrimage of Mercy.  However, we found that the lineups were too long. 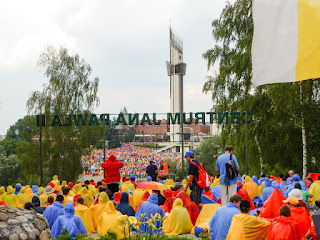 We turned back and headed towards Tauron Arena for Life Teen's XLT Eucharistic Adoration event.


Even though we were an hour early, we were unable to make it in due to the large crowds already in the arena.

We went back to the Old Town to have dinner at Chimera.  Then we went back to St. Mary's Basilica for adoration since we couldn't get into XLT.
Posted by Dennis at 12:00 PM No comments:

We were excited to begin our World Youth Day week today.

After breakfast at the hotel, we set off on public bus to the Old Town.  We ducked into the first church we came across, St. Anne's church, to spend a little bit of time in prayer. We then entered the Market Square.  It was bustling with pilgrims:  Different country flags being waved, WYD red, blue and yellow backpacks everywhere.  There was a feeling of familiarity, as people were saying "hi" to us, and we were saying "hi" back even if we did not know them—we were united through the Catholic Church. 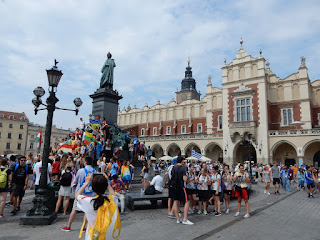 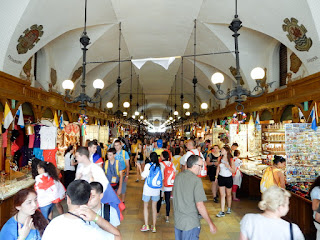 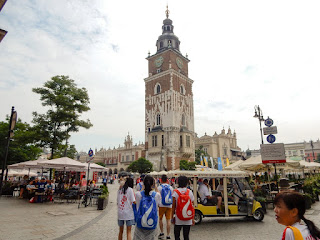 We attended the Canadian gathering in the Tauron Arena in the afternoon.  We met our friends from other groups in Vancouver and across Canada.

In the afternoon, we went back to the Old Town and visited St. Mary's Basilica. 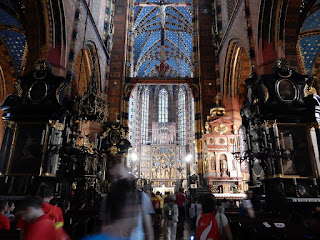 In the evening we participated in the Opening Mass at Błonia Park.  This gave us the first glimpse of the immense proportion of World Youth Day. 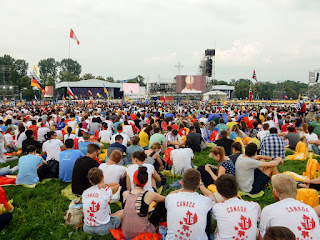 We found that due to the road closures around Błonia Park, the bus to our hotel was no longer running.  So we walked three kilometers back to the hotel, which was good pilgrimage training for the vigil at the end of the week.  We had dinner at Portobello again, and now are resting for an early start tomorrow.
Posted by Dennis at 12:00 PM No comments:

After breakfast with our host families, we said farewell to them.  A lot of tears were shed, as it was difficult to part ways with our host families who have been so hospitable to us over the past week.  They have given us a place to stay, breakfast in the mornings, supper in the evenings, and have taken us out to the parish and to places around the city.  The volunteers and Fr. Kuba at the parish of St. Andrew Boboli also were so generous with their time with us.  We couldn't thank all of them enough.

The bus ride to Kraków took about six hours, including rest stops.  The route took us over two-lane roads winding through the Polish countryside and small villages.

At the conclusion of the long bus ride, we checked into our hotel, Daisy Superior, and went to Portobello, a nearby Italian restaurant for dinner.

Although we were sad to leave Warsaw, we are excited to be in Kraków to start our week of the main World Youth Day events.
Posted by Dennis at 12:00 PM No comments:

Tomorrow we leave Warsaw for Kraków, and the main World Youth Day events.
Posted by Dennis at 12:00 PM No comments:

We are a group of twelve pilgrims from St. Francis Xavier Parish in Vancouver, Canada writing about our preparations and journey to Kraków for World Youth Day 2016.